In celebration of Black Music Month, the 7th Annual Black Music Honors continues to honor artists and musicians who have made an incredible impact on American music. This year, the two-hour live event was hosted by two time Grammy winner Letoya Luckett and Actor/Comedian DeRay Davis. The awards show was everything you anticipated and more.

Black excellence was on full display as the iconic group Kid N’ Play reunited for a nostalgic performance that had the crowd feeling like they were in House Party all over again. Jade Novah, Zonnique, and Dondria Nicole paid tribute to Keri Hilson singing her hits: “Pretty Girl Rock”, “Turnin Me On”, and “Knock Me Down”. After the viral success of the “Can We Talk” challenge, it was only right that R&B crooner Avery Wilson would be the one of the artists who paid tribute to Tevin Campbell. He and Eric Bellinger had everyone hypnotized by their smooth, silky vocals.Tasha Page-Lockhart, Crystal Aikin, and sisters Ahah and Rhea Walls, took us to brought the house down and took us to church with their tribute to Mary Mary. Singing hits such as “Yesterday” and “Shackles”, they kept the crowd rocking and brought them to tears at the same time.

One of the many highlights was the performance by Dru Hill. As soon as “Tell Me” begins, you know to immediately hit the infamous step-hop combo. It felt 1996 all over again. Other jaw-dropping performances included Kevin Ross, Carl Thomas, Sheléa, Amber Riley, and Eric Roberson who delivered an incredible tribute to Jerry Butler. 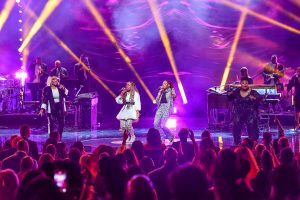