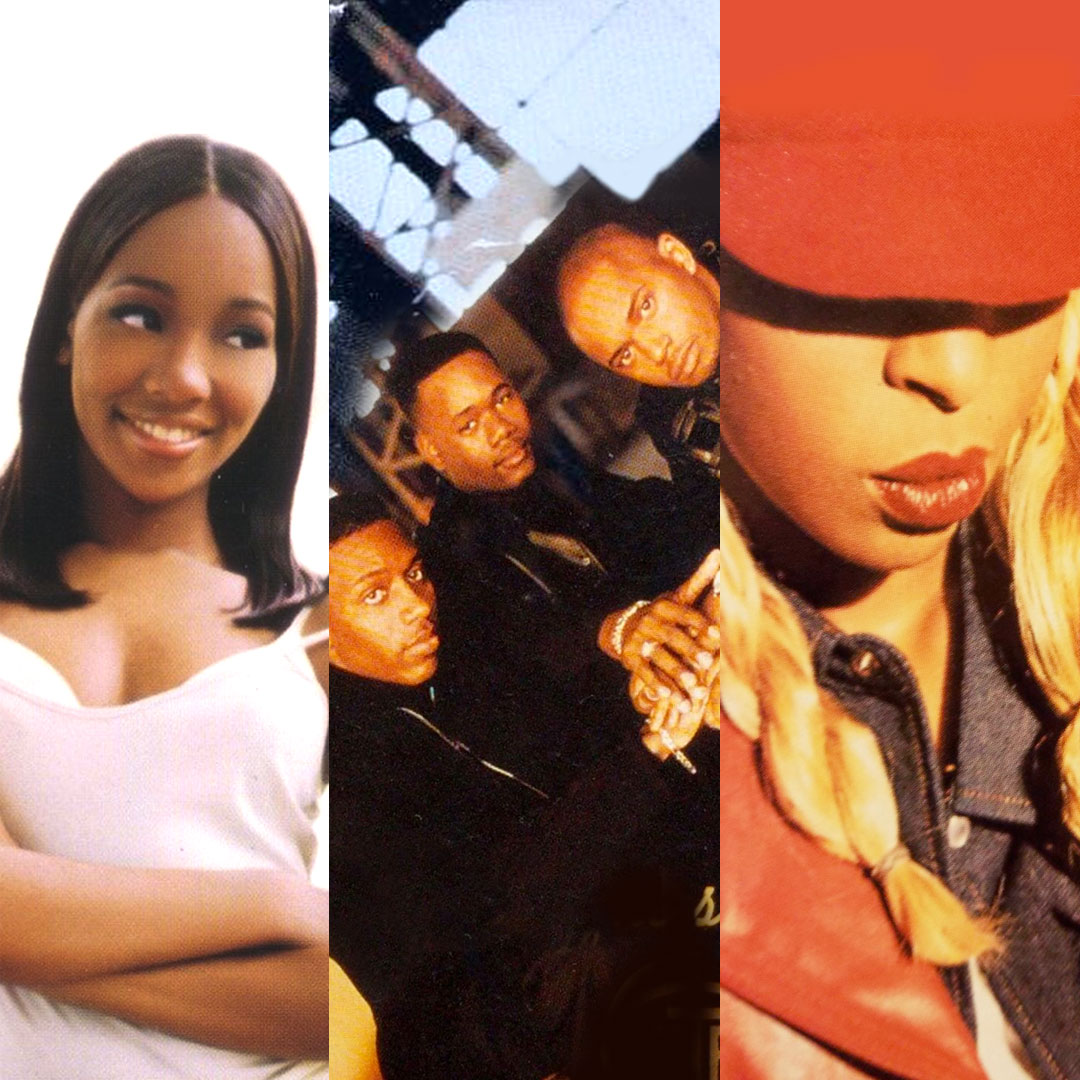 COVER STORY | The best cover songs are the ones you don’t know are covers. Throughout the 90’s, many artists we loved took time to pay homage to the songs that influenced their sound. Adding their own flavor to familiar tunes, these updated renditions birthed new classics that would become time capsules for the next generation. Let’s review the top 10 cover songs in 90’s R&B.

At Your Best (You Are Love)
A self-professed fan of The Isley Brothers, Aaliyah followed up her 1994 debut single, “Back & Forth” with this sweet serenade lifted from the group’s 1976 album, Harvest for the World. From the first notes in acapella, we were all enraptured by Aaliyah’s feathery vocals and comforting, mature delivery which hinted that this girl has been here before. The R. Kelly-produced rendition rose to No. 6 on the Billboard Top 100 Charts and nestled the late singer into our hearts.

Who Can I Run To
There is no 90’s R&B female group that has had more growth than Xscape. Members LaTocha Scott, Tameka Harris, Tamika Scott, and Kandi Burrus stepped on the scene, defined by producer Jermaine Dupri, as “the female Jodeci”. Powerful vocals paired with gritty style, the quartet’s 1994 debut “Just Kickin’ It” represented girls who loved hard and sang just as hard as the street’s circumstances. For their second LP, Off The Hook; however, the ladies tapped deeper into their femininity on this unforgettable cover of The Jones Girls’ 1979 ballad, “Who Can I Run To”. Gone were the girls in baggy jeans, flannel shirts, and bandanas; we were now in the presence of women. This song was a game-changer and earned Xscape their second platinum-selling album.

This Woman’s Work
When neo-soul entity Maxwell gave a performance for MTV Unplugged in 1997, he premiered an angelic cover of Kate Bush’s hit “This Woman’s Work”. Harps and violins as way-finders for notes that levitated, his ownership left many of us ignorant that this was not an original composition. As both versions saw success on the charts, Maxwell introduced this folk song to an urban audience. The chanteur later recorded and released the a studio version of the song that appeared on the Love & Basketball soundtrack in 2000 as well as his 2001 LP, Now.

Giving Him Something He Can Feel
The ladies of En Vogue reincarnated this cover of the Curtis Mayfield-penned opus from the 1976 film Sparkle. Originally recorded by Aretha Franklin for the film’s soundtrack, the funky divas breathed new life into this sultry classic while maintaining its retro soul. Featuring flawless harmonies and lead vocals by Dawn Robinson, “Giving Him Something He Can Feel” introduced listeners to this Mayfield’s genius composition while becoming the second single of En Vogue’s 1992 sophomore studio album to top the Billboard charts.

Ribbon in the Sky
It is hard to deliver a Stevie Wonder song, much more deliver it nearly better than the musical genius. It may be a bold statement but there is great weight behind it. Such is the case for Intro’s victorious cover of 1982’s “Ribbon in the Sky.” Every note is perfect, every harmony blended evenly among members Buddy, Kenny and Jeff. It is a contemporary reimagining that feels as earnest and heartfelt as the original ballad. The Brooklyn trio even received blessing by Stevie Wonder in the song’s music video.

Angel of Mine
Shortly before gliding to #1 for four consecutive weeks on Billboard Hot 100 charts, Monica’s “Angel of Mine” belonged to British R&B group , Eternal. Written by Grammy Award-winning producer and songwriter Rhett Lawrence, the group topped the UK Singles charts and earned Eternal’s Greatest Hits compilation triple platinum-selling status in 1997. Produced by Rodney “Darkchild” Jerkins, Monica’s rendition was released just one year later with equal success, certifying her own sophomore album, Boy Is Mine, platinum in 1999.

I’m Goin’ Down
As soon as “I’m Goin’ Down” by Mary J. Blige begins, you are sure that it has been here before. You are also sure that it is something special. Written by classic soul-songwriter Norman Whitfield, the ballad feels as relevant on 1994’s My Life album as it did when Rose Royce originally recorded the song in 1977. Like a well-aged wine, it is beautifully vintage and poured with unfiltered emotion behind each note. Surprisingly, “I’m Goin’ Down” didn’t secure any accolades at the time of its release nor did it break the Top 10 on R&B charts; but it remains an anthem that continues to secure the Queen of Hip-Hop Soul’s reigning position upon the throne.

I Will Always Love You
There isn’t much that needs to be said about Whitney Houston’s tour-de-force, “I Will Always Love You”. It is Houston’s greatest vocal performance and if you were present during its dominating rise on the charts in 1992, you still recognize your blessing today. Recorded for the soundtrack to The Bodyguard, the film in which Houston made her starring debut with Kevin Costner, it was Costner who contacted original singer and songwriter Dolly Parton for permission to repurpose her 1974 single. The country singer was honored and we are so grateful that she gave clearance. Executed with sentimentality, vulnerability, and powerhouse bravura, it is no wonder why it is the most lauded and monumental recording by the greatest voice of our generation. In a recent interview, Dolly Parton shared that she first heard Houston’s version while driving and had to pull over. “I could not believe how she did that. I mean, how beautiful it was that my little song had turned into that, so that was a major, major thing.” #RIP Whitney.