When you think of some of the greatest R&B groups of the 90’s oftentimes, Silk is left out of the picture. While most people automatically go straight to groups such as Jodeci, Boyz II Men, etc., Silk has proven time and time again that they deserve recognized in that same capacity. This quintet which consists of Timzo (Timothy Cameron), Jim (Jimmy Gates, Jr.), Big G (Gary Glenn), Lil G (Gary Jenkins), and John John (Johnathen Rasboro), are one of the few groups from 90’s who continue to produce great music and live shows. Silk consistently delivers both vocally and sonically, and let me tell you, they’ve only gotten better with age. In case you’ve forgotten, let me remind you by sharing some of my favorite songs from the group, and why y’all better put some respect on Silk’s name. 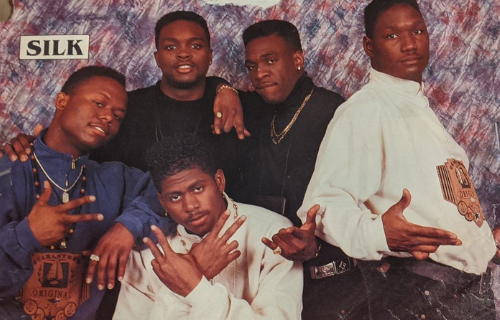 There isn’t any group that can compete with Silk vocally. Hands down they have the best range of octaves of any group I’ve ever heard. Every member of the group brings an amazing assortment of vocal ranges, and when they harmonize together it is literally music to your ears. My favorite Silk song that showcases this is Lose Control. When I first heard this song I was blown away. The song begins with a soft, beautiful arrangement that prepares you for the magic ahead. As the song progresses, Lil G hits you with a svelte, rich vibrato that makes you close your eyes and just feel. By the time the chorus begins and Silk breaks into a five-part harmony, you’ve already developed goosebumps. What I love most about the song are the insane ad-libs that each member produces. I live for a great falsetto and Lose Control gives me all of that and then some.

Meeting in My Bedroom

Whew! I don’t even know where to begin with this song. After stepping away for a few years, Silk came back with their third album Tonight released in 1999. The first two singles, If you (Lovin’ Me) and Meeting in My Bedroom, reminded us of why we fell in love with the group in the first place. Meeting in My Bedroom is a playlist staple. This song comes in swinging right out the gate and hits you with an octave variation, that I am still trying to master. John John takes the lead on this song and it works perfectly. He sets the tone with a smooth, seductive melody in the first verse singing each note with intention and precision. It’s a lighter, softer sound and much different from the rich tones we’re used to with Lil G. As the second verse begins, John John switches it to a falsetto and lets us know why he is the king of that register. He continues mixing the two sounds with the bridge and as it ends, Lil G takes us home belting out ad-libs in only the way Lil G can. The vocals and lyrics of this track will have everyone meeting in the bedroom.

The song that started it all. If you don’t know this track, I am giving you some serious side-eye. This song peaked at No. 1 on the Billboard charts and for good reason. Freak Me was a very different record at the time it was released. Yes, it was a song about getting it in, but the way it was recorded set it apart from the other songs. The way the verses are arranged in this track reminds me of a man whispering sweet nothings into a woman’s ear. You know the tone I’m referring to. The group is named Silk for a reason. The combination of that and the group’s silky vocals create an atmosphere that will leave you wanting more. I love the fact that the majority of the singing on this track takes place on the chorus and ad-libs. When Lil G hits us with the “Baby, don’t stop” at towards the end of the song, I don’t want him to stop singing, and I’m sure you don’t either.