The R&B of Gospel 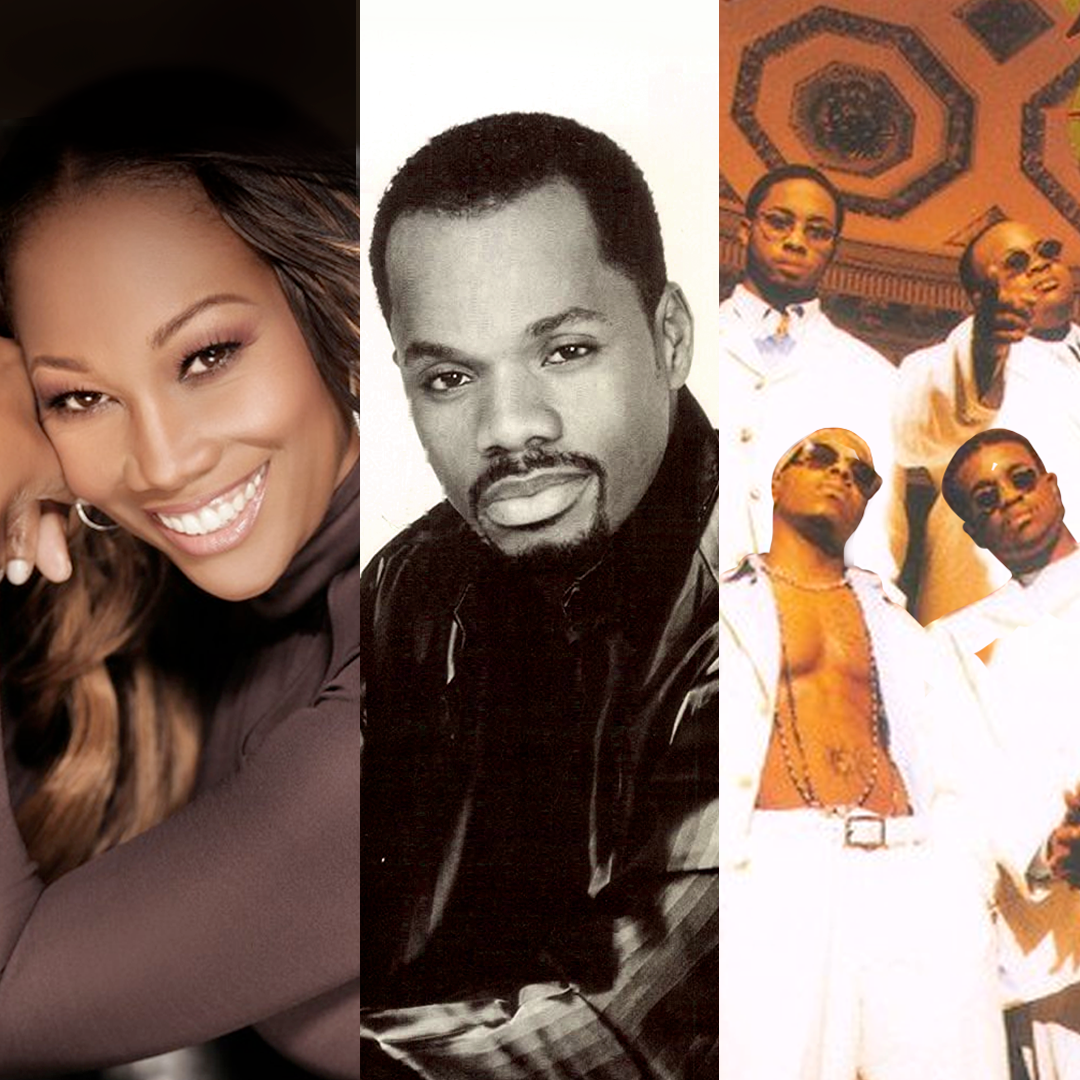 COVER STORY | 9 times out of 10, your favorite artist grew up singing in the church. From Aretha to Whitney to Faith to D’Angelo, artists planted their roots in choir stands before making a name for themselves in mainstream music. With a foundation of faith, some singers used their lessons for secular purposes while others chose to lift their voices solely to God; thus, birthing a new sub-genre of 90’s Gospel R&B, with crossover appeal that impacted urban radio and added a lil’ more Jesus to our mixtapes. No matter the vessel, these 90’s Gospel R&B songs blurred lines, delivered inspiration and changed the sound of worship and praise forever.

BeBe & CeCe Winans – Addictive Love
R&B was banned in the Winans household, yet siblings Bebe & CeCe found a clever way to incorporate its forbidden stylings into their praise for a pioneering sound. The duo carried the weight of their musical namesake, shifting directions musically for their fourth album, Different Lifestyles. On the silky first single, “Addictive Love”, the Teddy Pendergrass-meets-Luther Vandross warmth of BeBe’s tenor pairs with CeCe’s tender yet firm alto to deliver a volley of exaltations to a higher power. Under the guise of romantic yearning, a listener could easily overlook that the lyrics of “Addictive Love” were a love letter to God. It had all the ingredients of an R&B hit and crossed over accordingly, topping the Billboard’s R&B Singles chart for 2 weeks in 1991.

Kirk Franklin & God’s Property – STOMP
“For those of you that think gospel music has gone too far…”, you hadn’t seen nothin’ yet! There’s no denying that Kirk Franklin is the Puff Daddy of Gospel and “STOMP” solidified that position. Previously criticized releases by Kirk Franklin & The Family such as “Whatcha Lookin’ 4” and personal favorite “Melodies From Heaven” walked a fine line between contemporary gospel and secular music. When Franklin placed his latest crew, God’s Property, center stage in 1997, it was clear that this wasn’t your grandmama’s congregation. Sampling Funkadelic’s “One Nation Under a Groove, the crunk hymn commands you to join the holy ghost party featuring born-again bars by Cheryl ‘Salt’ James, one half of legendary female hip-hop group, Salt-N-Pepa, who exchanged talk about sex to talk about the Lord. The video got Big Mama’s pressure back up as the unorthodox choir members and its director dressed in streetwear and sheer tops (looking at you, Kirk), while bankhead bouncin’, and tootsie rollin’ all over BET and MTV. Described by Franklin as “church for the unchurched”, the genius of “STOMP” opened the doors to Sunday service, welcoming clubgoers from Saturday night to come as they are and leave different.

Yolanda Adams – Open My Heart
Yolanda Adams was already one of the greatest contemporary gospel artists of our generation. When she released her sixth album, Mountain High, Valley Low, in 1999; however, she became the irrefutable queen. While working with Warryn Campbell, Richard Smallwood, and Fred Hammond, it was a collaboration with R&B production duo Jimmy Jam & Terry Lewis entitled “Open My Heart” that ascended Adams to a new audience platform. Executed with stellar vocals coupled with the grace of Whitney Houston, the ballad found its place among slow jam countdowns, peaking at #10 on the R&B/Hip-Hop charts and #57 on the Billboards. A rare feat for a gospel artist, “Open My Heart” was a groundbreaking game-changer, spreading a message that transcended genre and resonated across generations.

Mary Mary – Shackles (Praise You)
When sisters Erica and Trecina (aka Tina) Watkins hit the scene, the duo known as Mary Mary added a new layer to the sound and look of gospel music. While backup singers for Brandy, the duo began writing songs for 702, Yolanda Adams and their own project alongside their producer Warryn “Baby Dubb” Campbell. Honoring the juxtaposition of the bible’s two Mary’s; the Mary, mother of Jesus and Mary Magdalene, the fallen-then-saved disciple of Jesus, one might be deceived by the duo’s appearance. They dressed like your homegirls and tastefully embraced their skin and hair expressions, but their voices were ANOINTED. Released in December 1999, first single “Shackles (Praise You)” was an uplifting, bouncy offering that encouraged listeners that through the circumstances of life, there’s always something worth making a joyful noise. While reaching success among gospel, R&B, and pop audiences, some saints criticized the song for being “too modern” but you can’t fight progress. “Shackles” rose to be a top 10 R&B hit, a top 40 pop hit, and peaked at number 28 on the Billboard Hot 100’s. Gospel was moving into the new millennium with a fresh lacquer and leveled position beside Rhythm and Blues.

Sounds of Blackness – Optimistic
Although Sounds of Blackness had the traditional style of coordinated Sunday Service attire, “Optimistic” was far from your traditional hymn. Signed to R&B super-producers Jam & Terry Lewis’ Perspective/A&M record label, the choir fused joyful harmonies with rising New Jack Swing. Lead vocals by Ann Nesby, Carrie Harrington, Coré Cotton, Patricia Lacy, and Jamecia Bennett were showcased among the resounding chorus. Catchy, uplifting lyrical affirmations over a thumping bassline attracted the ear of not only gospel fans – but dance and R&B enthusiasts as well, reaching #17 on Billboard’s US Dance Clubs Songs charts and #3 on the Hot R&B/Hop-Hop Songs charts. Like the title of their 1991 debut release, The Evolution of Gospel, “Optimistic” showed that the genre was transforming to minister to a larger congregation on the world stage. No matter what your denomination, as long as you keep your head to the sky, you can win!

Trin-i-tee-5:7 – My Body
From the first time I was introduced on a Soul Train Awards broadcast, there was something that felt familiar about the ladies of Trin-i-tee 5:7. Perhaps it was the formula we’d come to adore in girl groups like SWV, Brownstone, Jade, Kut Klose and 702. This particular trio set themselves apart with harmonies that centered on the ultimate relationship with God. Spiritual Love, the sanctified 1999 sophomore album featured “My Body”, a strong declaration of celibacy. The sassy and sultry vocals of members Chanelle, Angel, and Adrian tackled a subject matter that swam against the tide of its ranking company as the single broke onto the Billboard Adult R&B chart. Peaking in the Top 40 and selling over 1 million copies, “My Body” established the holy trinity as one of the most successful contemporary gospel acts of the 90’s and proved that you could be both, sexy and saved.

Dru Hill – 5 Steps
Saints, let me explain! Before someone was sleeping in Sisqo’s bed, Dru Hill began as a legit gospel group. Along with childhood friends Nokio, Woody and Jazz, the quartet perfected their four-part harmonies gigging at church events and talent shows before being discovered. Although the Baltimore natives predominantly used their mainstream platform to sing songs of sex, love, and heartbreak, they never forgot whence they came, consistently including a gospel song into their repertoire. Written by group member James “Woody” Green, “5 Steps” was released as the fourth single from their eponymous 1996 debut and was a strong departure from previous singles “Tell Me”, “Never Make A Promise” and the aforementioned hit, “In My Bed”. As any 90’s R&B Karaoke attendee will attest, this ballad is pure church. Equipped with prayers for our mother, our father, and even one for the loves of our lives, it is an altar call and the benediction. Reminding us that life is too swift and short to take those we love for granted, “5 Steps” peaked at #5 on R&B/Hip Hop charts and was an unexpected song of faith that preached a universal message that remains relevant in our current climate.

The doors of the church are open!

If you’ve been blessed, follow me on IG: @brockwell1984