Movie Review • Loosely based on Spike Lee & his siblings (who co-wrote the script) childhood, Crooklyn showed us what life was like in the 70’s in Brooklyn. Lee wanted to give his audience a lighter tone after the “controversial” film Malcolm X. He gave us the story of a beautiful little girl by the name of Troy who was the only girl of 4 brothers. If you grew up around boys, you completely understood the frustration she went through in that house.

I love how the movie started with all the kids playing outside. Although Spike had to teach each child the street games they were playing, it still took me back to my childhood when we would play outside all day. If you got thirsty you just took a sip out of the water hose & kept going. When Woody yelled outside that it was time for dinner, it really made me miss being a kid. Spike did an excellent job capturing what it was like in a black household. When Carolyn was standing over Nate until he ate his black eyed peas, that was a triggering moment because my mama did the same with me but with peas. I hate them still to this day. 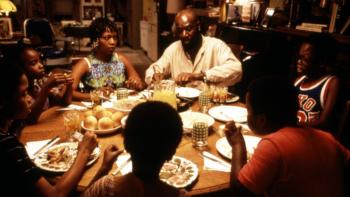 When Troy left for Maryland for a few weeks & they kept saying they were going south, I thought they meant the actual south like Georgia. I guess for New Yorkers, anywhere below them is the south. The scene where Troy was making fun of how Aunt Song & her family talked was kind of questionable because that is not how they talk in Maryland. You need to go below the Mason Dixon for that country twang. Queenie will forever live in our hearts, but the way she popped out that couch will never not be funny. Aunt Song didn’t care about nobody but that dog. If she had to choose between her family or Queenie, Queenie would come first with no hesitation.

Although Aunt Song was a menace, I think Troy had a feeling something wasn’t right with her mom before she left for MD. If Troy hadn’t left Maryland earlier would she have gotten a chance to see her mom before she passed? Carolyn & Troy had a strong bond although she stayed going off on them all, that mother daughter bond is forever. Troy instantly went into “woman of the house” mode after her mom passed. Unfortunately, a lot of black girls had to take on that role whether they wanted to or not.

Crooklyn is in my top 3 of Spike Lee joints. It was a simple movie with a lot of substance that really reached the black household. You may not understand everything the family went through but I can guarantee there was at least one relatable scene in the film.