Album Review • After the height of her album revolving around social justice, Janet stepped into 1993 as a sex symbol with her self-titled album janet. Janet threw out the fully covered clothes for the halter tops & choker necklace. Damita Jo was sitting comfortably in her sexuality and she wanted the whole world to see it.

“That’s the Way Love Goes” was a smooth sensual vibe with an undeniable groove. The video is a fan favorite, as Janet & her friends are kicking it while vibing to the Jimmy Jam & Terry Lewis hit. The video showed that sometimes when a song is as good as “TTWLG” you don’t have to do much. Originally the label wanted “If”, which was written during a label meeting, to be the first single but Janet pushed back & made it “TTWLG”. Once that “If” video dropped Janet had fans sweating over the red-light district Asian setting, along with the unforgettable choreography. That breakdown will go down in history as one of the greatest. Nobody has been able to give Janet better choreography since Tina Landon & I will stand 10 toes down on that. 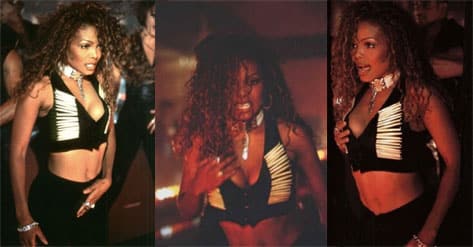 After the success of “If” Janet gave us the Oscar nominated hit “Again.” A heartbreaking ballad about running into an old love and realizing the feelings are still there. The song wasn’t given serious consideration for the album until the producers of Poetic Justice requested a ballad for the soundtrack. Jackson states she was “still in a poetic space” after Poetic Justice, inspired by the late Maya Angelou. So that’s how most of the janet. album was written, especially “Again.”

Her next big hit “Any Time, Any Place” showed us why you MUST call her Ms. Jackson, because sis is nasty and we LOVE IT! Janet’s soft vocals over that organ & the finger snaps is perfection. It’s still one of her top ballads almost 30 years later. Although my favorite song on the album did not have a video, it was a single. If “Throb” come on please clear the area because I’m about to go off! It is the perfect dance hit, & her performance on the Velvet Rope tour is still one of my favorites.

If I had to choose my favorite Janet album, it would be between janet. and The Velvet Rope. I feel like Janet was in her prime during those albums. Most of her best songs & performances came from those albums. I understand now the captivation she has over the world. She is naturally sexy with a shy & humble personality but also held her own. They don’t make them like Janet anymore.

Make sure you tune into her 2-night documentary on A&E and Lifetime tonight at 8pm eastern, 7 central.